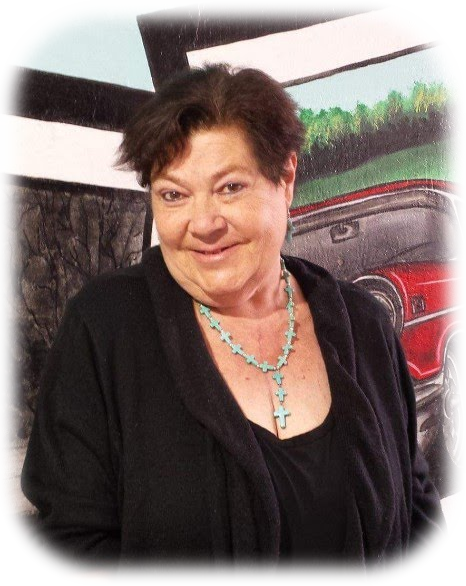 At about 4 years, old, the family relocated to Alaska, where they lived for a couple of years. Sandy would tell stories of her time there. One memory being a bear attack while she and her sister were sleeping in the living room. She would say “Daddy saved our lives that night!”
The family then relocated back to Oklahoma when Sandy was about 6 or 7 years old. Sandy was quite the daddy’s girl always wanting to help in any way. She would work right alongside him.
By the time Sandy was 8 years old, she was raising rabbits, and chickens, and would sell the rabbits and chicken eggs for extra money. When she wasn’t doing that, you could find her riding her bike with her best friend, Rowdy. At 11, Sandy and her family moved to Arkansas, she would tell stories of her going fishing with her dad and Sam Walton on many occasions! After a couple of years of living in Arkansas, the family decided to move back to Oklahoma to stay! At 13, Sandy found her first true love, her horses “Snowball” and “Streaker”. She loved animals so much that you would never know what kind of strays she would bring home. By the age of 16, Sandy married and had her first child, Belinda. Then at 21, She had her twins, Sonya, and Tonya. Sandra later remarried and was married to Gary McClain on July 16, 1984.

Sandy loved her family, having fun, lots of pink flamingos, and taking long drives with the music cranked high. She liked anything with a good beat to it. She was silly, fun, loving and stubborn as a mule! Sandy was also very close to her sister, Brenda and her nephew, Shaun. So close, that Belinda, Sonya, Tonya, and Shaun were raised together like brother and sisters. One of the many special times they had together was when Brenda surprised Sandy with a girls only cruise to the Bahamas! Sandy’s love for animals and caring for others continued throughout her life. She proved her love by being a volunteer with the Rogers County Humane Society, housing more than 100 dogs at one point, and spent countless hours making and painting donation boxes that were in the shape of dogs to help raise money. Sandy was also a Certified Nurse Aide, and Certified Medication Aide. Pets and people are what Sandy knew best! Sandy had numerous friends and was loved by many. She will be missed dearly by her family and friends, and they will cherish all of the good times they had with her.

To order memorial trees or send flowers to the family in memory of Sandra Kay "Sandy" (Woods) McClain, please visit our flower store.