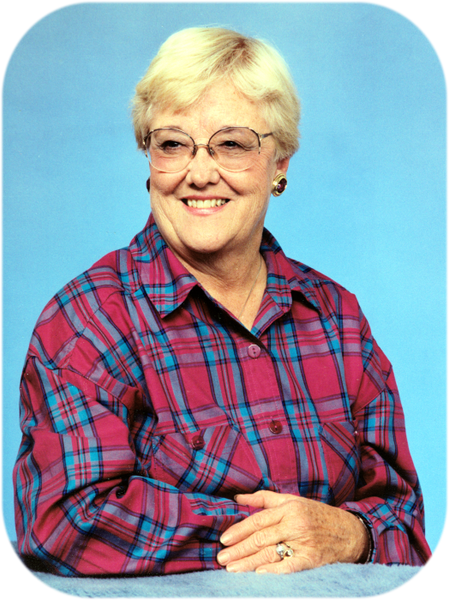 Priscilla was born September 21, 1926 in Sperry, OK to John Alma and Inez (Patton) Smith in an oil camp delivered by Dr. Buel Humphreys. She passed away August 8, 2019 in Owasso, OK.

Her father, John and Aunt Leona and Uncle Ervin were born in Deposit, AL and they moved to Lima, OK in 1900 and became members of the church there. Leona had married Ward Rumsey, the minister in the church. John and Leona came to Sperry in 1916 and Ervin went to Lamoni, IA. John met Inez Patton and they were married in Turley in 1918. They were all involved in the oilfield work and Oklahoma was the place to be. John and Leona moved into Sperry on N Cincinnati Ave in 1919 and John and Ward started a grocery store. Inez had visions and directed some of John’s later decisions, the store in Turley, the home he chose. Priscilla grew up with discernments of the Spirit and how they could lead them. She grew up in church every Sunday, sometimes all day, and on Wednesday nights, all the stores and businesses closed at 5:00 PM. They always fasted on Communion Sunday and for other special needs. Priscilla was baptized in the Church in 1934 in Sperry.

Priscilla graduated from Sperry High School in 1944 and attended Oklahoma A&M, now known as Oklahoma State University. She was a member of the Alpha Delta Pi Sorority for 2 years. The church was the center of Priscilla’s life until she left for college in 1944. When she married Ted Coulson, and started her family, the Lord began to move on her to learn to serve. Priscilla and Ted were married in October 1946 at Tulsa Central by Brother O.A. McDowell. Priscilla was very shy but Lorane Rumsey and Dwight encouraged her to Reunion and helped pack her and Greg (about 9 months old then) and she went with her children. Brother McDowell was there, and she had a wonderful experience. With the help of Carl and Maxine Wheeler and the Teels, Priscilla was able to keep an eye on Greg who was crawling at that time. Wilburton always looked the same and since then, Priscilla never missed a reunion. Lorane was Priscilla’s mentor, as well as her Aunt Leona, Pearl Brown and all the quilting ladies. Priscilla ate lunch with them every day when in school and during the summer, they would all quilt outside at Brown’s corner. The youth had a wonderful time, good food and ice cream. When Priscilla’s daughter was at Bible school one day, Lorane was late, and there wasn’t anyone to play the piano. She bought a piano and started practicing only knowing one hymn. She was volunteered, so she played her one hymn for them to march in and to class. Lorane heard her playing and went home. From then on, Priscilla practiced with Lorane and the Lord was always pushing her onward. When she was young in the church, Inez played the Piano and John, who became an Ordained Priest in 1924, in Jenks, by Case, Bailey and Jensin, would be busy, so her aunt Leona kept her busy by making dolls out of handkerchiefs and laying down watching the fans. One of the Sunday School teachers, Mary Cloud, would tell us stories using a box of sand, where she made villages and told them about Jesus.  The church basement was a happy place, the ladies made donuts to sell and they would quilt there. Everyone always felt so much love.

Priscilla began to play the organ but was so shy and couldn’t announce the hymns for song service, so Morton Hampton, Russell Rumsey or Lorane Rumsey would have to. When Priscilla accepted the Women’s Leader position, it was done at Irma Rowden’s home and Maxine Wheeler was in charge. They all wore long dresses and as Maxine was reading her part, Priscilla felt relief from being so overwhelmed by what she was promising, that God’s spirit fell upon her and she could see her sister’s face. After that, Priscilla never feared what she was called to do. She was spoken to one morning and was with a friend who had just gotten a divorce and her two children, and they liked to smoke a cigarette about once a week. Priscilla had been asked to teach a class and felt she wasn’t worthy. She hadn’t told anyone yes or no yet but had prayed about it, it was Communion she really wanted to strength to tell Bonnie no more, but during the service Leonard Hicks spoke ministered and it really spoke to her and It was over. She didn’t know Mr. Hicks, but God knew her and wanted her to teach. She had Jean Ann, Gary and Jim. When they all got to the car, Bonnie asked Priscilla what had happened and told her she knew that that message was for Priscilla, It changed Bonnie’s life. She and her new husband and their children were then baptized. He was a Pastor at McAlester and served on the Reunion board. And in Finances were Arthur and Bonnie Wilson.

Priscilla had so many blessings from God in the Church. She held every office a woman could and had gone to the Jr High camps since her children were that age. Except those five years before 2001. God still directed her life and her church was always her peace and solace. It was great for Priscilla to see Patricia, Dwight and Brandon carry on the music heritage in the church. They had a violin and piano in the house before there was water. John played the trombone and Inez played the violin and piano. Her brother, Donald played the violin and her brother Bobby just didn’t like music. The Friday before Christmas in 2000 Priscilla fell but didn’t go the doctor until the 26th. They thought that she may have a fracture, so she went to another doctor who told her she needed a hip replacement. Priscilla directly went to the East Tulsa Women’s Circle meeting and they prayed for her. She then had Charlie Rowden and Roy Gaddy bless her. She was then inspired to call Johnetta Selvidge and then to call Clare Whitely, who sent her to an orthopedic surgeon that told her she only had a hip shadow and spurring. Priscilla felt that God blessed her every day and she always gave him praise and thanked him for his directions and care.

She was preceded in death by her husband, Ted Coulson; son, James C. “Jimmy” Coulson, Jr.; and parents, John and Inez Patton.

Click to download / open
To order memorial trees or send flowers to the family in memory of Priscilla Mae Coulson, please visit our flower store.