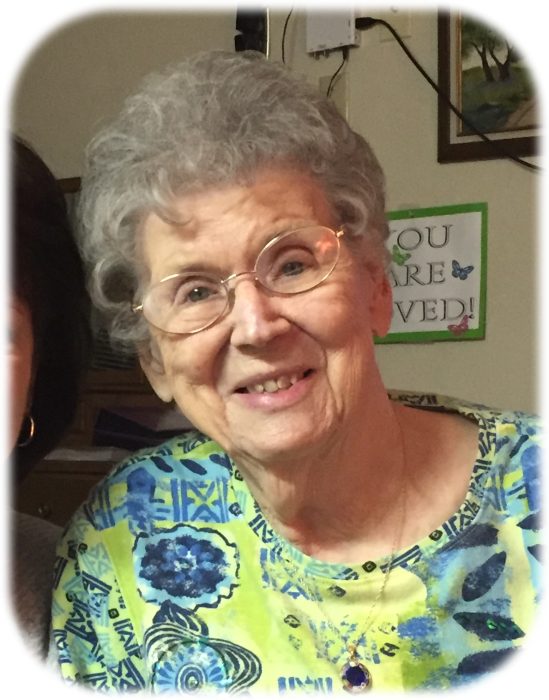 Pauline was born on a farm, the 8th of 10 children consisting of six brothers and three sisters. She was active in school sports, participating in basketball, volleyball, and track. Her mother passed away when she was 17 and she stayed at home to work to get her two younger brothers through high school. She left home after her youngest brother graduated and shortly thereafter met Donald Edwin Wirtz, a sailor who stole her heart. They made their home in Brooklyn, NY.  After the war, they moved to Columbus, Ohio. From that union they produced two daughters, Donna and Mary Ellen. Donald supported the family by playing piano professionally and selling magazine subscriptions door to door. Tragedy struck the family on January 2, 1950, when Donald unexpectedly died of a heart attack leaving her a widow with their two daughters ages 2, and 3 months old. She was only 28 years old. Pauline was aided by her family by moving into a house on the same street as her brother, Denzil, and her father in Lancaster, Ohio.

In 1953 she bought a Greyhound bus ticket to visit a friend in Indiana.  She took the hand of the driver to board the bus, she said she felt electricity. It was love at first sight between Pauline and the driver, Jack Schooley.  They soon married and the family of four moved into Jack’s home in Indianapolis, Indiana. Donna and Mary Ellen welcomed a new little sister, Barbara Lynn, affectionately nick named “Bobbi”. In 1955, the family relocated to Sperry, Ok, so Jack could assist his stepfather, J. R Pickens, in his grocery business. A son, Douglas James, was born the next year, making the family complete. Pauline became active in the Reorganized Church of Jesus Christ of Latter-Day Saints and soon was baptized as a member in 1960. As a member of the Sperry congregation, she served the Lord in many capacities throughout her life as Sunday School teacher, Orioles Girls’ Leader, Women’s leader, Church Librarian, Church Recorder, and Cradle Roll Chairperson. She always volunteered with the Christmas Bazaar, making memorial sprays, assisting with dinners, creating worship settings, and she always took her turn cleaning the church. Attending Reunions was important to her faith and she looked forward to it annually.

She was active in the school by serving on the PTA, and as homeroom mother for her children.  She volunteered as a tutor at the Elementary School and later was employed as the school Secretary. Her community service included being a Girl Scout leader with her lifelong friend, Priscilla Coulson, a senior citizens officer, and a Friends of the Library committee member.

After the loss of her husband, Jack, she pursued many hobbies, one of which was painting classes taught by Lorene Rumsey. She painted many beautiful pictures one of which survived the Oklahoma City bombing. In addition, she learned to piece quilts and made one for every family member. She loved ceramics too, I am sure we all have a piece or two she made us. Her hands stayed busy with cross stitch and embroidery.  Her creativity extended beyond the needle, writing poetry was an enjoyable endeavor for Pauline as well. One of her poems was selected to be published in the Tulsa County’s annual library book of poems by senior citizens. The poem, “A Remembrance,” is printed in the handout. Of all the activities Pauline was a part of, spending time with her family was the greatest joy of her life. She loved to have her children, grandchildren, and great grandchildren gathering in her home especially around the table. Her chicken and noodles and German potato soup were made with love and were family favorites.

Throughout her lifetime Pauline proved herself to be an extraordinarily strong and independent woman. She survived colon cancer in her forties followed by five decades of blessed good health. Unfortunately, her colon problems returned causing a need for major surgery at the age of 92. She was sent to Evergreen Care Center for rehabilitation. After only a short time, she was named the Goodwill Ambassador welcoming the new residents. Evergreen became her home for the next seven years. During this time, Pauline suffered a broken ankle and a broken hip. Surprisingly, she also survived pneumonia and Covid-19. Pauline’s faith in the Lord, Jesus Christ, was an inspiration to her family.  Her notes and letters of inspiration were shared with many. Sometimes her letters arrived at times when those words were needed to lift your spirits. She never let her situations in life get her down. She always believed that God would see her through no matter the circumstances. That belief was deeply rooted in her love for her Lord and that love was shared freely.

The story of her life on earth has ended, but it is continuing in heaven.

She was preceded in death by her husbands, Donald Wirtz (1950) and Jack Schooley (1978); daughter, Bobbi Schooley (2010); nine brothers and sisters; parents, Simon and Laura Derr.

Arrangements and services were entrusted to Johnson Funeral Home, Sperry

To order memorial trees or send flowers to the family in memory of Pauline Gladys Schooley, please visit our flower store.