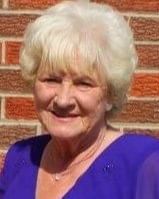 Kathy was born May 8, 1944, in Tulsa, OK, to John Clifford Wilson Margaret Dorothy (Reed) Wilson. She passed from this life on January 1, 2023, at her home surrounded by her children, in Stroud, OK.

Kathy attended school in Mannford, OK. She married her husband, Johnny Leon Barnes on February 21, 1972. She retired from the City of Tulsa. She enjoyed many camping trips and fishing at Lake Eucha. She enjoyed spending time with each of her grandchildren and that enjoyment only doubled when her great grandchildren were born. Her grandchildren were the light of her life. After many years of living in Sperry with her husband, she moved to Stroud to be closer to her son, daughter-in-law, and daughter after his passing. The last few years of her life was enjoyed working alongside all three of them at Route 66 Biker Rally where she met many, many new friends that became like family. Kathy enjoyed Bingo for many years and Bunco became a new favorite after moving to Stroud. The Casino was another place she was truly happy at.

To order memorial trees or send flowers to the family in memory of Mary Kathryn (Wilson) Barnes, please visit our flower store.