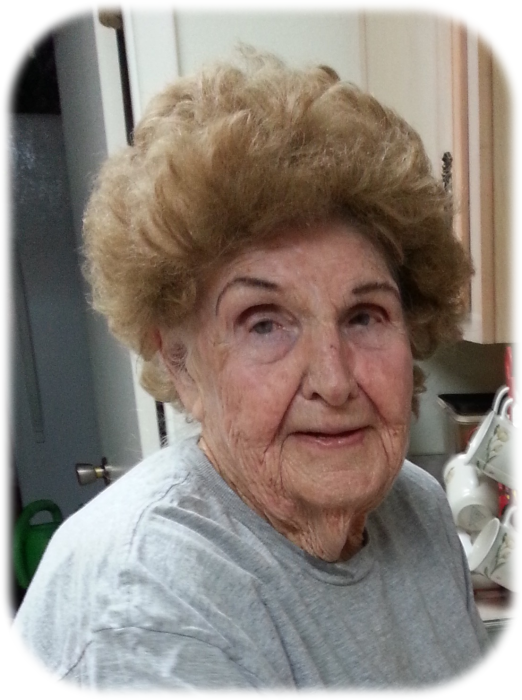 Jean was born January 31, 1927 in Chewey, OK to Ada (Odle) DeArmon and Wedd Hampton. She passed from this life to eternal rest with Christ Jesus, our Lord, on May 1, 2017 in Broken Arrow, OK.

She was raised in the home of her maternal grandmother, Sallie McCoy Odle. Jean had two brothers, Edgar DeArmon and Harlon DeArmon. She and Bernard Dice Hensley of Elkton, Virginia were married February 2, 1946 and had 51 years together ‘til his passing in 1997. To their union were born two sons, Gary Leon and Jerry Lee. Jean and Bernard worked as a team. Together they built their own home in Disney “brick by brick”. They were also known as artist/craftsmen spreading their wares at crafting events all over Oklahoma. Bernard made most all of their ceramics molds, while Jean filled, cut, trimmed, sanded, painted and fired them. They loved to dance and frequented Cain's and Cimarron Ball Room in their earlier years. When Jean and Bernard, along with her brothers, Edgar and Harlon, and their wives, Marge and Doris, went out together, shenanigans were bound to happen. Jean was an earthy person, not pretentious about anything and nobody had to guess where they stood with her. She loved gardening and was especially proficient raising tomatoes. As a matter of fact, she was out delivering tomatoes to her friends the Wednesday before Thanksgiving when she fell and broke her hip. Prior to that event, at 89 years of age, she was self-sufficient; driving her own car, cooking, baking pineapple upside down cakes, gardening, collecting cookbooks and new and old recipe books. She was a whirl of activity. The Bible states “if we would have friends, we must first show ourselves friendly.” She had bucket loads of friends and most wouldn't talk bad about her because she knew too much about them! Jean loved Jeff Gordon and was an avid NASCAR fan. She was an avid shopper, though she seldom left home to do any. Why would she need to with QVC at her fingertips? She may well be THE one that singlehandedly kept QVC and UPS in business. In the late 1950’s there was a revival over in Collinsville. Someone invited Jean to attend; so, she took her sons, Gary and Jerry, with her. Something so earth-shattering happened for both her and the boys that they went home and told Bernard about what they experienced, and he went with them the next night. They made professions of faith and trusted Jesus as their personal Lord and Savior and were gloriously saved! Jean was active in the 1950’s in the Rebakah Assembly, a Masonic auxiliary. She was selected an officer in Lodge 297 and was pronounced 1st Noble Grand July 8, 1954. Her family is so very grateful for the many kindnesses shown to her in these latter months by faithful family, friends and neighbors.

To order memorial trees or send flowers to the family in memory of Mary Jean Hensley, please visit our flower store.