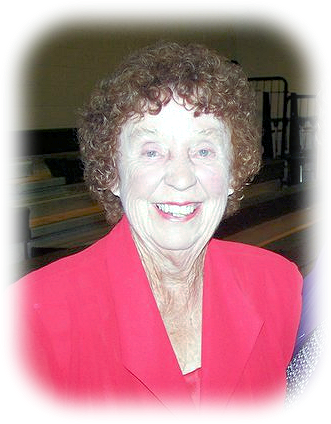 Jonnie Fae was born June 3, 1929 in a farm house on a ranch in Dundee, TX where her father, Oscar Clarence “Hawk” Lyles was a cowboy and her mother, Lalia Mae (Jackson) Lyles was the ranch cook. She went to be with her Creator on Wednesday, December 28, 2016 in Sperry, OK.

When Jonnie Fae was about seven years old, the family moved from Dundee, TX to just southwest of Sperry OK where Hawk worked for Barnsdall Oil Company. Jonnie Fae started school at Blackburn School, and then in middle school through high school she attended Sperry Public Schools. Jonnie Fae was active in the pep club four years and was a cheerleader her junior year. She also played softball and basketball.  She merited the athletic award her senior year. Jonnie Fae was the sports writer for the Sperry Schools newspaper. She was the Sperry High School football queen her junior year. She was the first junior to ever be football queen at Sperry Schools. According to friends, Jonnie Fae captured many laughs from the cast and audience in her presentation in the junior and senior plays. Growing up she was close friends with Colleen (Dilley) Bratton, Reba (Dilley) Bratton, Mary Lou (Perigo) Birkes-Cameron, Mildred (Birkes) Carter, Bonnie Jean (Smith) Lloyd and Julia (Barton) Coyle.  Jonnie Fae would spend most of every summer in Texas with her Aunt Grace and Uncle Finus Lucy and all her many Texas cousins.

After graduating with her Sperry High School Senior Class in 1947, Jonnie Fae went to work for the Coca-Cola Company in Tulsa, OK. She also clerked at the Stearns Department store in Tulsa. Throughout her life, Jonnie Fae was known for her quick smile, kind words, and never-ending work ethic.

Not too long after Jesse James “Jack” Basse returned home from serving in the Navy during WWII, Jonnie Fae fell in love with the young man of her dreams. On January 24, 1948, Jack and Jonnie Fae were married at Bill and Mary Buck's home in Tulsa by long time Sperry RLDS minister, Ward Rumsey. As a young bride, she moved with Jack to Hartshorne, OK where Jack was laying telephone line for Southwestern Bell Telephone Company.  Jack enjoyed telling the story that they hadn’t been in Hartshorne very long when Jonnie Fae told Jack she needed to go home to help her mother with the laundry. Jack put her on the bus which she rode back to Tulsa. Jack knew Jonnie was just homesick, but he couldn’t stay away from her for long and drove his Indian motorcycle that weekend to Sperry to pick up Jonnie Fae and take her back to their home.

In December 1950, because Jack had signed up with the naval reserve, he was called to active duty to serve on the USS Estes (AGC 12) a communication's ship as a Second Class Petty Officer during the Korean War. Part of that time Jonnie Fae spent working, but part of the time she also moved to California to be with Jack when he was in port. When Jack was discharged from the Navy at the end of the Korean War he and Jonnie moved back to Tulsa where they lived on 54th St North, about ½ block from Jonnie Fae’s parents. Jack & Jonnie Fae built their first home on 10 acres situated on 54th St. North in Turley. It was there that Jack & Jonnie Fae expanded their family and Jonnetta Lynn and Lonnie James were born.

Jack & Jonnie purchased 10 acres just west of Sperry when Lonnie was about one year old. They first lived in the garage of their current home while they worked to complete the rest of the house in which Jonnie Fae lived until the time of her death.

Jack and Jonnie Fae and the kids would spend their favorite vacations early in their young family's life visiting relatives in Texas and Arkansas as well as spending time on Flint Creek with the Seaton and Avant families. The kids would play in the spring-fed water while Jonnie Fae picked up rocks, which some might say were small boulders to take home. She would pick up so many rocks that as they would leave Flint Creek and hit bumps in the road, the tailpipe would drag. For those who knew Jack, he took special care of his vehicles and was not thrilled when the tailpipe would drag. He would turn to Jonnie and say, "I told you not to load the car down so much" and she would simply give him her special smile, Jack would shake his head and the young family would go on down the road toward home.

Once Jonnetta and Lonnie started to school, Jonnie Fae began working for Tulsa Public Schools.  She worked in the cafeteria for a couple of years, and then spent the rest of her 27 years as a school secretary at Sam Houston Elementary School where she remained until her retirement. Jonnie Fae was baptized into the Reorganized Church of Jesus Christ of Latter Day Saints in January 1962. Jack was ordained to the priesthood and Jonnie Fae was always working to support Jack throughout his many years in the ministry.  During the early 1990s, Jack and Jonnie Fae traveled to Blackgum, OK usually three times a week to provide manual labor and to help oversee the building of the church youth campgrounds.  Jonnie Fae and Jack spent most summers coordinating and attending youth camps and organizing church family reunions with Ernie and Pat Shank for the Remnant Church of Jesus Christ of Latter Day Saints.

In 1960-61 Jack and Jonnie Fae were instrumental in getting the Sperry Park built.  In addition to her church work, in 1972 Jonnie Fae was recognized as the Sperry Outstanding Alumnus. She also supported her children by being a Cub Scout Den mother, Home Room mother, PTA officer, FFA Mother’s club, Band Booster Club officer, active with the Sperry Alumni Association, and any other activity she could do to support her children, her school, her church and her community. Jonnie Fae enjoyed listening to country and gospel music. One of her favorite songs was Bob Wills’ “Take me Back to Tulsa”, only Jonnie Fae made sure that everyone knew the lyrics should have been “Take me Back to Sperry!”

During Jack and Jonnie Fae’s marriage they watched both children, Jonnetta Lynn and Lonnie James, attend and graduate from Sperry High School and become successful in professional careers. A son-in-law and daughter-in-law were added to their family, Jack Selvidge and Melissa (Williams) Basse. The proudest moment of Jack and Jonnie Fae's lives were when they were blessed with their five grandchildren; Amber and Shawn Selvidge and Brigette, Phillip, and Margo Basse. It was clearly evident those grandchildren were loved beyond words by their "Grandma". She was so proud of each and every one of them.

She was preceded in death by her parents, Oscar Clarence “Hawk” and Lalia Mae (Jackson) Lyles; her brother Paul Lyles; and the love of her life, her husband Jesse James “Jack” Basse.

There are so many the family would like to thank who helped care for Jonnie Fae.  Those include all the special prayers from so many within and outside the church.  To our church family for the many times you gave mom a special hug or a much needed visit, thank you. To Jimmy Crank and Roger Tracy a big word of thanks for the numerous times they were called upon to fix the plumbing and other items around the house that needed their special talents.  To Ronny Wilson who voluntarily cleared the snow from mom’s driveway one year so that we had safe access to her and her home.  A thank you to Cheryl Sink who made sure mom’s hair was always beautiful, even for her “going home”.  To Gary Eaton a huge “thank you” for all the times he made trips, even in the middle of the night, when a strong back and tender arms were needed to help mom.  And to those who provided special care to Jonnie Fae during her final years which included most especially Vickie Bratton, Faithee Anglen, Hailee Hines, Marcy Anglen, Debbie Lamberson-Eastin, Siota Mulford, Betty Hamil, Julie Pearson, Mindy Wensman, and Deb Van Dyke. To the Johnson family whose children were like grandchildren to mom and dad – thank you for making our family your extended family. And last but not least, her son-in-law, Jack, who helped numerous times with whatever was needed. We apologize for those we inadvertently missed naming – but you and God know who you are and may Our Heavenly Father grant you many blessings in return.

To order memorial trees or send flowers to the family in memory of Jonnie Fae Basse, please visit our flower store.