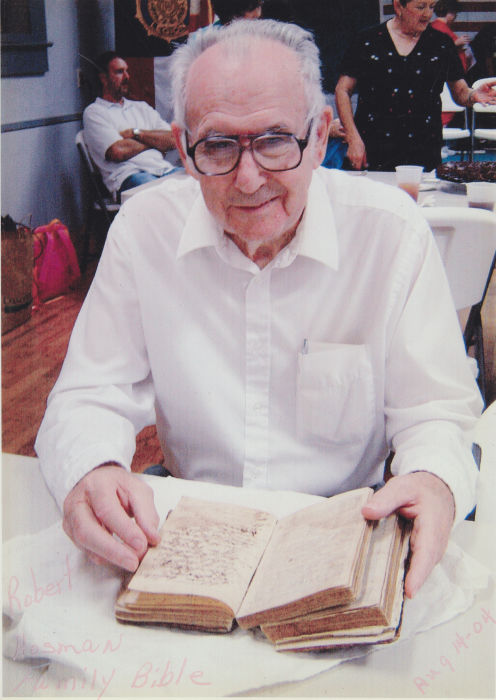 Robert was born April 9, 1923 in Russellville, AR to Joseph Ishmael and Blanche Rebecca (Hosman) Smith. He passed away June 4, 2018 in Tulsa, OK.

At the age of 95, Robert had seen many changes and experienced more in his life than anyone could imagine in our lifetime. Robert was seventh of nine children and grew up on a farm in Pope County, AR. Robert’s happiest childhood memories were during his first 8 years of life, before the Depression and the Dust Bowl. Although his childhood was a difficult one, he once again was about to face another difficult encounter in his life, the surprise attack on Pearl Harbor. This attack lead the US into World War II and by June of 1943, Robert was drafted into the Army and was part of the Pioneer Platoon (25th Infantry Division, 35th Infantry Regiment, Anti-Tank Company).  He was trained in the mine fields before being shipped out to Lingayen Beach, Luzon, Philippines. On January 11, 1945, his platoon landed there under enemy fire, and they fought until they regained control of the country from the Japanese.  The war was one of the most significant events in his military career. Before returning home and being honorably discharged in January 1946, Robert received the rank of Corporal. He also received the WWII Victory Ribbon, Good Conduct Medal, AP Theater Ribbon, Philippine Liberation Ribbon and two Bronze Stars.

Robert’s life after the war was much better and because of these life experiences and seeing first-hand what the price of war was like, Robert felt he was called to devote his life to helping those in need. After returning home to Arkansas, Robert worked for the International Shoe Company from 1948-1958 making only $2.50 an hour. During that time, the average income was approximately $3,216.00 per year. In 1948, Robert met a girl, Mary Crites, a sister of a friend and a year later, Robert and Mary married on October 12, 1949. They settled down and moved to Memphis, Tennessee so that Robert could attend Harding Bible College to study to become a Gospel preacher. He completed three semesters before moving to Oklahoma. Robert and Mary began their careers as child care workers for the Turley Children’s Home (now Hope Harbor Children’s Home) in 1961. Robert devoted 31 years of his life to the children’s home, helping over 200 children, including two of their own, Randy and Jamie, whom they adopted through the home. Robert was a truck driver for the children’s home, a house parent, a jack of all trades, and at one point a Resident Manager. Robert was also a preacher, preaching at several different Churches of Christ. Robert was an elder at Cincinnati Avenue Church of Christ. He also was a volunteer for the American Red Cross from 1970-1992. In 1992, Robert retired from the children’s home, but continued to preach.  He loved fishing, woodworking, gardening, and spending time with family and visiting with family and friends.

Robert had no regrets in life and he wouldn’t have changed a thing. He lived a very happy life overall and was able to share it with those he loved most. Especially Mary, whom he said had the greatest impact on his life. Over many, many years, Robert saw several changes in the world and was glad that his children and grandchildren had a better life growing up with more opportunities than he had. His greatest accomplishment in life was the opportunity to teach children about the Bible and his best advice was “Put your trust in God.”

He was preceded in death by his parents, Joseph and Blanche Smith; brothers, Clifford, Riley, Lester, Melvin and Billy Ray; sisters, Ethel Meeks and Bertha Byrum.

Click to download / open
To order memorial trees or send flowers to the family in memory of James Robert Smith, please visit our flower store.