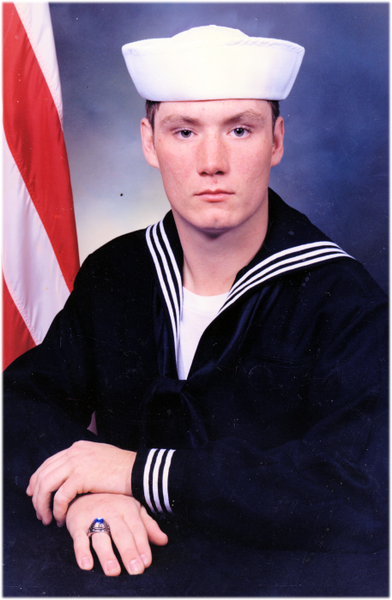 James was an electrical engineer for an aircraft carrier in the US Navy. James graduated from Okmulgee Tech with honors and then earned his bachelor’s degree. He was a 13-year member of the Harvest Baptist Church in Claremore. James had also achieved 15 years of sobriety. James was a happy child, he loved fishing with our dad and grandpa. When he was 5, James thought his sister, Patricia was the best kite flyer. She was 3....and she was the best! (Haha) When James and Patricia were little, they used to build these playhouses out of boxes.  That's probably where he used to hide her stuffed lamb a lot and other things and older brother would do to his younger sister to aggravate her. (Haha)

Our cousin, Dad and James used to love riding motor bikes together. Anything to do with building things, engines, cars. James was so smart; he used to take things apart and put them back together. At RadioShack, when we still had those, they would have the grab bags you could buy. He would build things out of them. In high school James wrestled and started working at QuikTrip at the age of 16. After graduation, James joined the Navy at the age of 20 to serve our country. Patricia is always reminded of how mathematically smart James was. She thinks that's why he was so good at buildings things.

Unfortunately, a few events in his life left James with irreversible damage to his brain and caused some afflictions he struggled with for years.

About 13 or so years ago Patricia took over her brother’s care. He was just surviving and not really living. It took about 18 months to get his medical needs straightened out and Patricia brought him to live in her home. They spent Thanksgiving at her friend’s house not long before he came to live with Patricia, and she remembered her friend telling her that James thanked her and that it was the best turkey he had ever had. Before, James would never have been clear headed enough to say anything like that.

James went to Patricia and told her he was going to start going to a church and they'd pick him up not long after Patricia moved him to her house. This was probably the single best thing in James’ life that lasted until his death. They brought James to the Lord and saved his soul and his life. His church family, at Harvest Baptist Church, will really never truly understand how accepting and loving James changed had his life. The dinners, the Christmas and birthday gifts that were always made sure to be given, the love, the fellowship. It changed his life. Thank you.

James and Patricia haven't always had the easiest of times the last 13 years. But she knows that even through the hard times that she did the best she could to give him the quality of life he deserved. Patricia and James were not always close after they grew up. Different paths, different choices in life. But Patricia is glad that she got to share these moments with him until the end.

They prayed a lot the last few weeks. Patricia is thankful for her parents and Marie help making his last days peaceful. They could not have done it without each other.

One thing Patricia does know, is that her brother is free in Heaven. Free of his pain. Free of the dungeon his mind has been in. Free of any afflictions and seizures. He is smiling, happy, probably building something or riding a dirt bike. Perhaps he is fishing.

Click to download / open
To order memorial trees or send flowers to the family in memory of James Lee Moss, please visit our flower store.