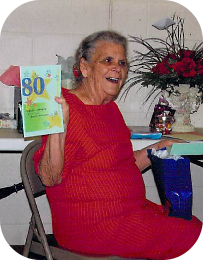 Helen was born June 21, 1933 in Stigler, OK to Henry S. and Cora E. (Rusk) Spencer. She passed away March 2, 2018 in Tulsa, OK. Helen grew up in Vera, OK where she graduated high school. Helen married Virgil Sappington, Jr. on November 21, 1951. In 1978, they moved to Sperry where they have lived since. She was a devoted wife, mother, grandmother, great grandmother, sister, aunt and friend. She will be remembered for her desire and ability to share love with everyone she met. Helen was an active member of the North Point United Pentecostal Church in Sperry.

She is survived by her husband, Virgil Sappington, Jr. of the home; sons, Gary Sappington and wife Teri of Avant and Gerald Sappington of Dallas, TX; son-in-law, Douglas Spicer of Jenks; granddaughters, Susan Rivers and husband Bryan of Jenks and Amy Sappington of Sapulpa; grandsons, Dennis Spicer and wife Heather of Jenks, and Jared Sappington of Avant; numerous great-grandchildren; brother, Richard Spencer and wife Glenda of Independence, MO; and many other relatives and friends.

She was preceded in death by her daughter, Donna Spicer; brothers, James Spencer, and Marvin Spencer; sisters, Cleo Teague, Thelma Smith and Rosella Smith; and parents, Henry and Cora Spencer.

Click to download / open
To order memorial trees or send flowers to the family in memory of Helen L. Sappington, please visit our flower store.