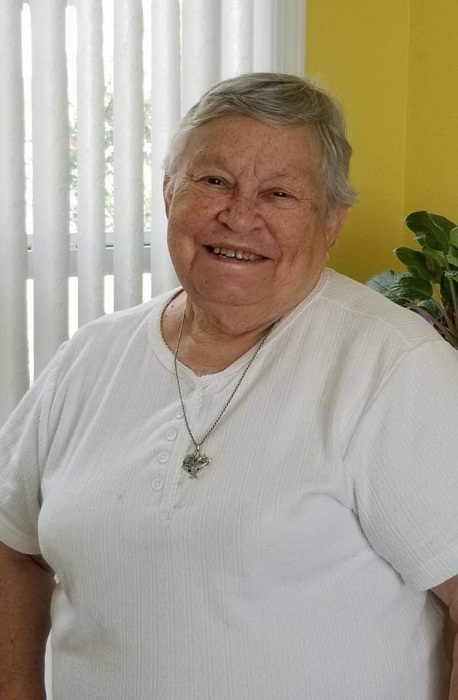 On February 28, 1956, Frankie married Wendell Mount, the boy who grew up across the street. Frankie had three children, Kelly, Alan, and Shona. They made their first home in Tulsa, OK. She worked with Dr. Hugh Spencer, a pediatrician, as a nursing assistant. Later she worked at St. John Tulsa nursery where she loved working with the newborns. After a time, the family settled in Hominy, OK where she worked for Drs. Lakin and Brewer.

She excelled at creating things with love, be it cooking, quilting, embroidering, or ceramics. She collected dolls and Precious Moments figurines. She was especially great at providing for family gatherings, a request for one dish was met with at least five! Her epic Easter egg hunts were a delight to family and friends, and she spent at least half the year planning and gathering prizes for the hunt. A passionate sports fan, Frankie always cheered on her Oklahoma State Cowboys and her Oklahoma City Thunder.

She is survived by her husband of 65 years, Wendell Mount; daughter, Kelly May; son, Alan Mount and wife, Jill; grandchildren, Heather Shanta and husband, Randal, Rebecca Mount, and Elizabeth Garrison and husband, Zach and Nathaniel Echols; great-grandson, Brayden Shanta; brothers, Grady Gaylord and wife, Margaret, and Garrett Haiflich; numerous nieces and nephews; and many other relatives and friends.

She was preceded in death by her daughter, Shona Echols; grandson, Brian May; father, Ferman Haiflich; and mother, Irene Bowman.

In lieu of flowers, the family requests that memorial donations be made to The Journey Home, 900 NE Washington Blvd, Bartlesville, OK 74006

Arrangements and services were entrusted to Johnson Funeral Home, Sperry

Click to download / open
To order memorial trees or send flowers to the family in memory of Frankie I Mount, please visit our flower store.