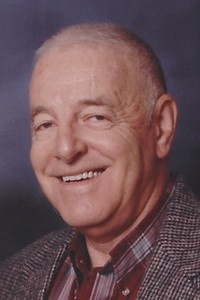 Mr. Shank was born April 3, 1927 at home in Carthage. He was the son of the late William and Nora Shank.

He graduated from Carthage High School in 1945 and joined the U.S. Navy. Ernie later went to Graceland College, Lamoni, Iowa, and was recruited by Phog Allen to play basketball at Kansas University. He graduated from KU in 1950.
Ernie was a member of the Remnant Church of Jesus Christ of Latter-Day Saints. He was a presiding elder for many years and was a patriarch in the church. He also taught Sunday school classes, Bible classes and played the piano and organ.
He worked for the Steadley Co. for many years, Leggett & Platt, and in his later years, worked with his son at Pioneer Freight Systems, in Joplin, Mo. Ernie was one of the original manager-coaches when Little League was started in Carthage in the 1950’s. He continued into the Babe Ruth and Pony Leagues for many years. He was always active in different sports programs and supported local teams. Ernie loved all good music and especially the "Big Bands". He married Patricia Harrington on November 22, 1952.

He is survived by his son, Mark Shank and wife, Brenda, of Joplin, MO; daughter, Robin Bayless and husband, Jim, of Carthage, MO; nine grandchildren;15 great-grandchildren; and many other relatives and friends.

He was preceded in death by his wife, four brothers and one sister.
A memorial service was held on February 23, 11 a.m. at Community of Christ Church, Joplin.

Online condolences to the family may be made at johnsonsperry.com.

Click to download / open
To order memorial trees or send flowers to the family in memory of Ernest Leroy "Ernie" Shank, please visit our flower store.