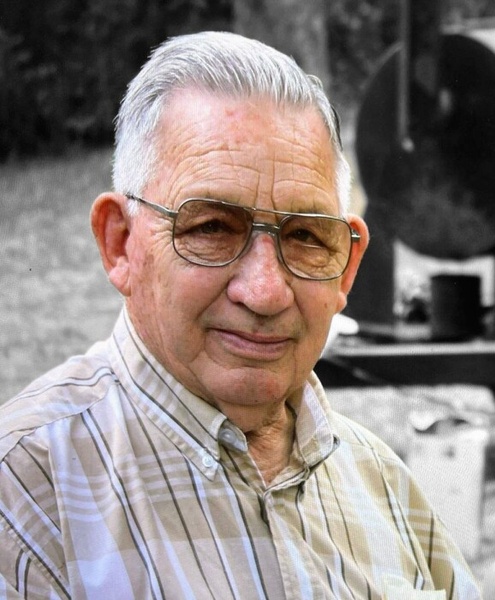 Chick was born July 24, 1931 in Prescott, Kansas to Cleo Dot (Phillips) Holmes and William Crandall Holmes on the family farm. He had three brothers, Jim, Bob, Wayne, and two sisters, Cleo Ann and June.  June Springer is his only remaining sibling, the others have preceded him in death.

Chick worked at Crane Carrier for 20 years, where he retired, but for most his working life he worked with his brother Bob Holmes selling Kirby vacuum cleaners.

Chick and his first wife, Opal (Bland) Holmes, had five children together: Peggy, Donnie, John, George and Crandall.  He was later blessed to have 17 Grand Children and 21 Great Grand Children.

“Crandall” (Chick) was a third-generation namesake, and three more “Crandall’s” have followed: his son, his grandson and his great grandson – six males all named “Crandall Holmes.”

He enjoyed our many large family gatherings, lake barbecues, and celebrating family holidays together.  He always had the latest baby on his lap.

Chick always planted and tended a big garden every year, producing legendary tomatoes. He also collected Vintage Antique Tractors, which he put to good use delighting his grandkids with tractor rides at Papa Chick's Place.

Chick was also an avid "treasure" collector, sourcing from the many Flea markets and auctions, and he enjoyed the art of the negotiation and trading his finds.

Chick is preceded in death by grandson Dylon Holmes and his son John Holmes, as well as former wives Edna Holmes and Florence Holmes.

His companion Martha Zimmerman was his late-life angel, and we are all grateful for her presence and support in his life these last few years right to the day he passed.

His family celebrates that he is now with his Lord in Heaven, having lived a long and happy life. He will forever be remembered with love and missed by his family and friends.

A Memorial Service and Life Celebration will be held on Saturday, June 4th, 2022, at the Tulsa Family Church located at 2021 N. Joplin, Tulsa, OK 74115 by Pastor Jerry Eperson.   Life Celebration and lunch to follow services.

To order memorial trees or send flowers to the family in memory of Crandall Holmes, Jr., please visit our flower store.